In response to climate change, fossil fuel depletion and environmental pollution, renewable energy sources are promoted significantly which lead to a mismatch between the power supply and demand. Moreover, renewable energy sources are widely distributed worldwide. From the perspective of energy supply security, the resilience of the energy system to external disturbances should be considered as well. In this context, ammonia has been proposed as a promising energy carrier due to its merits of affordability, safety, flexibility, and versatility. However, it should be noted that ammonia as an energy carrier is not carbon-free throughout its life cycle. Moreover, knowledge concerning reactive nitrogen losses to the environment for the ammonia energy system is very limited. Carbon and nitrogen footprints are two important indicators of sustainability for the ammonia energy system. Determining the carbon alone could lead to the negligence of nitrogen impacts and vice-versa. In 2019, we conducted assessment to better understand the trade-offs between different footprints which was identified as one of the challenging issues.

This study investigated the carbon footprint associated with greenhouse gas emissions and the nitrogen footprint associated with reactive nitrogen emissions from the ammonia energy system. The results were published in the ACS Sustainable Chemistry & Engineering. In this study, four scenarios (Japan to Japan, JP-JP; Australia to Japan, AU-JP; Chile to Japan, CL-JP; Saudi Arabia to Japan, SA-JP) were modeled based on international relations and energy distribution between these countries. As shown in the Figure, the performance of four scenarios were ranked as JP-JP > AU-JP > CL-JP > SA-JP from the perspective of greenhouse gas emissions. With regard to reactive nitrogen emissions, the order was JP-JP > AU-JP > SA-JP > CL-JP. Compared with Japan electricity mix, JP-JP was a win-win scenario in both carbon and nitrogen footprints. SA-JP performed worse under which fossil fuel was used as hydrogen source. Under AU-JP and CL-JP scenarios, trade-offs were identified. The carbon footprint decreased while the nitrogen footprint increased simultaneously.
Improvement of key processes identified by contribution analysis is critical to improve the environmental performance of the ammonia energy system.

New applications of ammonia in the energy sector may give rise to new problems, and solving one problem might simultaneously give rise to others. This evaluation relayed information on the sustainable use of ammonia as an energy carrier by examining the relative impacts on both carbon and nitrogen footprints. In future, apart from renewable-based ammonia, recovered ammonia assessment will also be conducted under the big picture of nitrogen cycling towards sustainability. 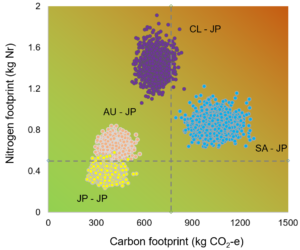